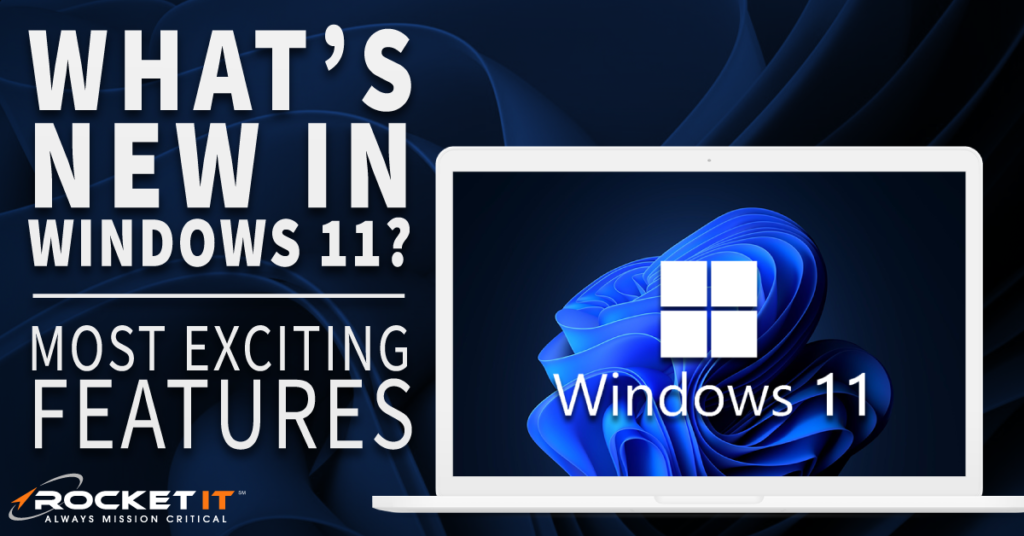 Six years after Windows 10 hit the market, Microsoft has finally unveiled its new operating system, Windows 11. Expected to launch in late 2021, Windows 11 will still provide users with access to the power and security they have grown accustomed to while also offering access to new features designed to improve productivity.

While Microsoft is still working out the details, the new operating system is scheduled to be released in late 2021 and continue its initial rollout into 2022. For those individuals that are already running Windows 10, Windows 11 will be available as a free upgrade for devices that meet the minimum system requirements. That said, keep in mind that older laptops and desktops may struggle when running this new operating system. The PC Health Check App, which has been temporarily removed by Microsoft, will allow you to run a test to ensure your current PC is compatible with the awaited update.

For those users who don’t want to wait for the final product to release, Microsoft has offered those individuals enrolled in its Windows Insider Program with access to a beta for testing.

But with Windows 10 having released just six years prior in 2015, why is Microsoft releasing Windows 11 instead of updating its current operating system? Simply put, security concerns are credited as a serious reason for the developer’s rushed introduction of the new operating system. Like any piece of software, there’s likely to be a list of vulnerabilities waiting to be discovered. That said, a notable security risk in Windows 10 comes in the form a zero-day vulnerability known as PrintNightmare. Through an extensive process, hackers have found a way to exploit Windows 10’s printing function, giving them access to the individuals entire device. To get an understanding of what makes a zero-day attack different from a standard security vulnerability, check out this page for more details.

In addition to resolving some of Windows 10’s well known security issues, Windows 11 aims to lay a foundation that can evolve to prevent new threats and scale to meet the cybersecurity needs of most businesses. For example, new to Windows 11, PC users will gain access to a new version of Microsoft’s Trusted Platform Module. Through this welcomed update, Windows 11 PCs will be able to better protect encryption keys, user credentials, and other sensitive data from the eyes of cyber criminals.

What Else Is New in Windows 11?

Throughout the lifespan of Windows 10, the user interface of the operating system has remained mostly the same. But, as with most major revisions, Microsoft is adding quite a bit of changes that are bound to improve the quality  of life of any Windows user.

The Start menu, along with the app icons, are no longer trapped in the left-hand corner of a user’s screen. Instead, a user can decide to center them for easier access and increased productivity. The layout of the menu is simplified and lets the user pin frequently used apps, access multiple files in a hurry, and quickly shut down or restart a device.

One collaboration app in particular, Microsoft Teams, will call the taskbar its new home in Windows 11. It is now tightly integrated into the system, giving individuals a faster and more seamless way to connect with colleagues, family, and friends. With the new Chat function, individuals can quickly use video calls and chats to connect with contacts no matter what device they’re on. The new integration will include support for faster screen sharing, adding contacts across different applications, and even scheduling meetings directly through the platform. Microsoft allows participants to mute or unmute right from the taskbar to easily control background noise. And because Microsoft Teams has a mobile companion app on iPhone and Android, switching between conversations at the office and while on the go will become even easier.

In 2021, most people consider two or more monitors a necessity, rather than a luxury. In turn, Windows 11 has upgraded its docking function for laptops that connect to external monitors. Now, when a device is undocked, the windows on the external monitor will be minimized so Windows can automatically arrange everything in the same position when it is re-docked.

For those individuals that regularly find themselves looking for new apps or plugins via the Microsoft Store, expect to see an overhauled experience in Windows 11. Android apps and games will be available on Windows devices thanks to a partnership with Amazon. There is also a new pop-up store feature to help individuals install apps directly from a web browser. And finally, Microsoft is revamping  its app review process, allowing developers for the Microsoft Store to now have the freedom to publish new and innovative apps.

What is Windows 11 Snap Layout Tool?

With Windows 11, the Snap Layouts Tool is getting its debut. Users can hover over the maximize button to position multiple windows into a succinct view that is fluid and works for them. To increase productivity further, the new Snap Groups helps organize the open windows saved in Snap Layouts according to task, subject topic, or anything in between. The groups are contained in the taskbar and allow a user to quickly switch tasks with a simple command.

For users who prefer inputting information by touch, inking, or voice, Windows 11 will come with a new voice typing launcher, improved touch gestures, and a new pen menu. There are also 13 new themes for the touch keyboard to further personalize the device.

Windows Vista set the bar with a feature called Windows Desktop Gadgets that was discontinued after Windows 7. However, for those avid-users, Windows 11 will see a resurrection of those beloved features by the name of Windows Widgets. The widgets provided by Microsoft include calendar, weather, local traffic, to-do lists, OneDrive photos, sports, stocks, and tips, but a user can easily add, remove, rearrange, or resize widgets for a more customized experience.

Despite all the new features, it is important to remember that the ultimate reason for the new OS is security, and while Microsoft has committed to supporting Windows 10 through October 14, 2025, it’s important to keep your current operating system updated to fend off cybersecurity attacks or unknown zero-day vulnerabilities. To receive updates on this upcoming technology release and more, sign up for the Rocket IT Newsletter using the button below.