How to Prevent Zoombombing | Zoom Settings to Change 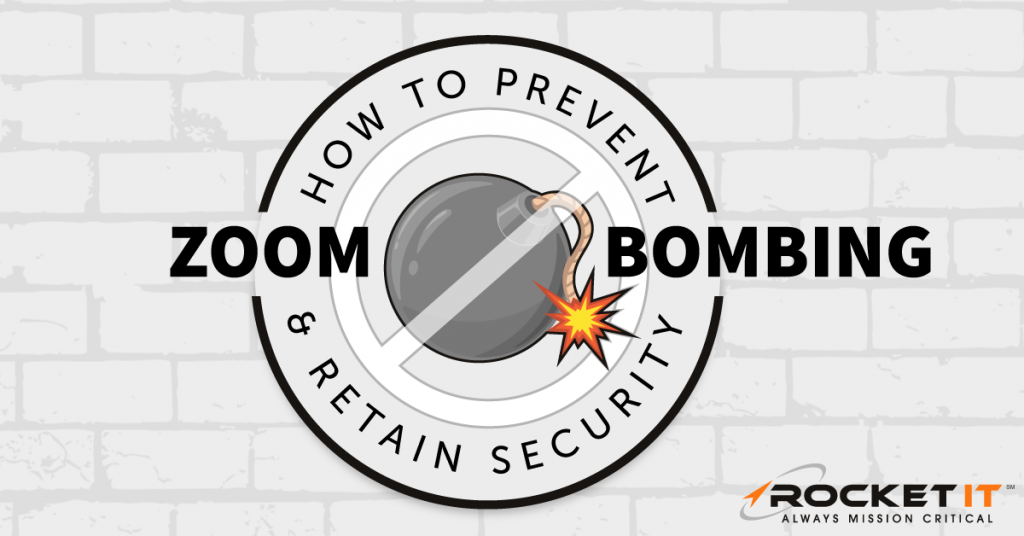 How to Prevent Zoombombing | Zoom Settings to Change

Meetings, classes, and networking events; a few of the common social gatherings that have felt the brutal impact inflicted by recent physical distancing ordinances.

And although such preemptive measures are necessary to fight the ongoing effects of COVID-19, taking such an approach just a decade ago would have resulted in the inevitable collapse of daily communication between friends, families, and colleagues. But alas, here we stand in the modern era; technology in hand, ready to overcome the communicative barriers that lie before us.

With that said, there are a number of software developers to thank for these rapid advances in telecommuting technologies. Major companies like Microsoft, Google, and Apple have all done their part in making it a smooth transition to remote work. But although these technology giants have played major roles over the years, current issues have placed a smaller company in the spotlight of consumer attention.

For those who have yet to hear of the web client known as Zoom, it’s a stand-alone software with web conferencing and webinar capabilities. As it currently stands, the service offers quite an impressive free plan; providing individuals with unlimited one-on-one calls, and the ability to host 100 participants in a single meeting for up to 40 minutes. Coupling this affordable price point alongside a simple user interface allowed the platform to be quickly adopted by businesses, educators, and students that were looking to remain engaged while working remotely.

But like many technologies that experience a quick upward trend in global popularity, it was only a matter of time before Zoom’s developers found themselves under the scrutiny of the public eye. Because Zoom’s original default settings made it easy to share meetings with the click of a link, the social platform became a huge target for those looking to cause some trouble. And while Zoom has drastically improved its backend security measures in recent months, it’s crucial that users of the program update their client settings to attain optimum security.

But before diving too deeply into those setting alterations, it’s important to first understand the cohesive role they play in protecting individuals and their data.

Known commonly as “Zoombombing”, mischievous individuals can take advantage of public meetings without security measures; dropping in to share explicit audio or imagery with an entire audience of people. In turn, while Zoom’s series of recent updates now give hosts the tools to adjust security measures on the fly, previous iterations did not; leaving organizers with no other option but to cut meetings short when faced with uninvited guests.

Yet, despite Zoombombing appearing as rather a childish and mild annoyance, this issue ultimately went on to serve as a reality check for Zoom’s security team. In the late days of March 2020, the cybersecurity expert known as Mitch@_g0dmode uncovered a vulnerability exploitable by Zoom’s previously lax security measures.

What Were the Previous Risks?

While the vulnerability has since been resolved, to get an idea of what it entailed, we first have to look at the Zoom chat feature. For those with a fluent understanding of Zoom’s interface, it’s likely that you’ve used the text chat feature that appears in every meeting. Previously, people were able to share hyperlinked web URLs and file paths to server-based documents through chat; allowing recipients to open said content with the single click of a button. Unfortunately, the Zoombombing conundrum allowed uninvited guests to join said meetings and share malicious links with groups of unsuspecting individuals. In turn, clicking a link posed the risk of data theft or the account being compromised.

Although these attacks previously posed a threat to all Zoom users, those using Windows devices were at an even greater risk. For Windows users, it was discovered that UNC paths could also be converted into clickable links. But what exactly is a UNC path? Simply put, UNC stands for Universal Naming Convention, a common tool for identifying servers, printers, computers, and other devices on a network. In turn, if a Zoombomber shares a UNC path that connects a user’s device to a remote server that they control, not only will Windows send the Zoombomber said user’s device name, it will also provide their login name and encrypted passwords. From there, it may take a skilled cybercriminal with access to third-party tools only a few minutes to crack simple password chains.

Alternatively, rather than simply sending a UNC path to steal credentials for later use, Zoombombers may have enabled malicious files to automatically download to devices that connect to the servers they control. In turn, this typically would prompt the user to approve the running of a downloaded application. But for those who are unsuspecting, it can be easy to carelessly click “OK” and accept the installation without thinking. In theory, not only would this provide the cybercriminal with the victim’s Windows login credentials, it would give the hacker an opportunity to remotely access the device and take full control.

How Has Zoom Resolved the Vulnerabilities?

While partial blame for these vulnerabilities can be placed on Microsoft, Zoom has done an excellent job pushing out updates on a weekly, if not daily, basis. For the time being, Zoom has completely removed the hyperlinking feature in its chat. In turn, users are forced to either copy and paste these links into their appropriate application for opening; or use another method of communication. And although not much word has been provided on when this feature will be reinstated, Zoom’s Founder and CEO, Eric Yuan, assured individuals in a recent blog that his team has completely resolved the UNC path link issue.

Additionally, the organization has taken some extra steps to cut down on the Zoombombing attacks that have plagued the platform for the last couple of months. In a recent email sent from Zoom’s support team, they outline some of the steps they’ve taken to protect those who continue to use the platform. While there are quite a few on the list, here are some notable examples.

While it’s still best practice to enable security features before a meeting begins, Zoom’s recent update provides new security options directly in their meeting controls. As a result, hosts are no longer risk fumbling about during a call when attempting to adjust security settings. After starting a meeting, hosts can now click the security icon at the bottom of the client window to enable the meeting waiting room, lock the meeting, and alter the administrative rights of meeting attendees.

When a Zoom host launches a call, the meeting is assigned a unique ID, containing 9 to 11 randomly generated digits. Previously, these IDs were publicly displayed for attendees to see. And although having these IDs publicly displayed made it easy to share meetings with colleagues, it also allowed Zoombombers to use what is now known as “war-dialing” programs. By using one of these third-party services, cybercriminals could rapidly cycle through possible Zoom meeting IDs and gain access to those without password protection. While it’s still important to password protect meetings, meeting IDs are now privately enclosed and can only be seen when clicking the information icon in the top-left corner of a live meeting. 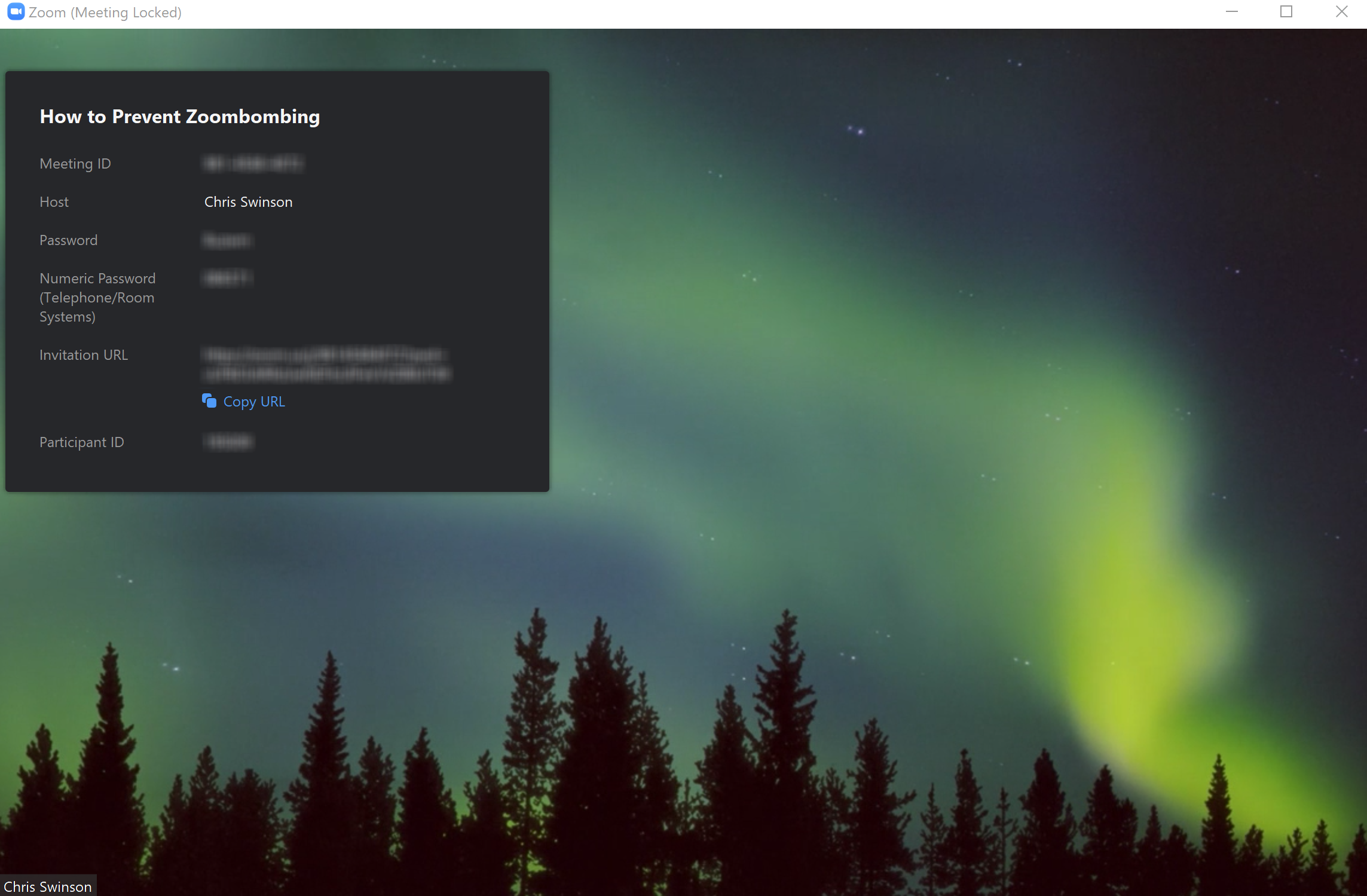 As mentioned previously, clickable URLs have now been disabled in meetings. Taking this a step further, Zoom has also removed the ability to conduct third-party file transfers through meeting chat. That said, local file transfers have been introduced with a recent update, meaning colleagues can still share files if they’re on the same network.

How to Check Your Zoom Client Version

Keeping in mind that these updates only take effect if you have the latest client version installed, it’s important to ensure your Zoom application up-to-date. Currently, the Windows client is on version 4.6.10, and Rocket IT strongly suggests keeping the platform updated to mitigate security risks. To check your client version, open the application and click your account icon in the top-right corner of the window. From the menu, select “Check for updates”, and install the latest version if prompted. 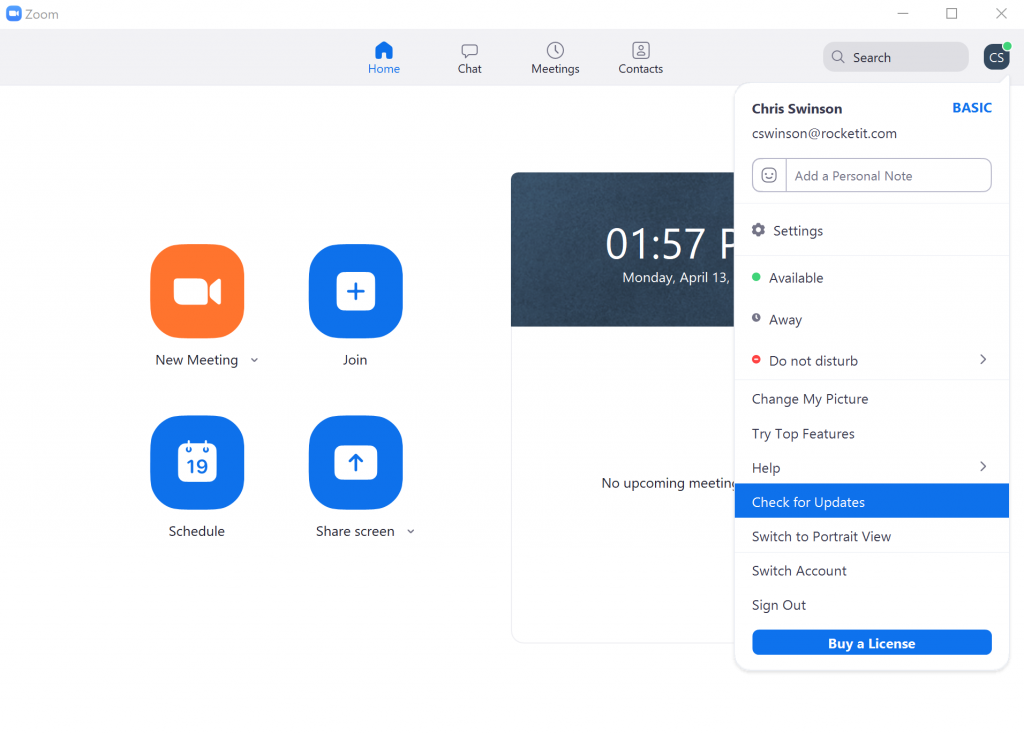 While Zoom’s developers continue to update the back-end security measures of the application, there’s only so much they can do. In turn, the responsibility of securing meetings and the information discussed inside falls partly on the shoulders of those who host the calls. With that said, here’s a specially curated list of security settings that should be enabled to mitigate the risk of Zoombombing and other attacks.

Settings to Enable Before a Meeting

Rather than launching a meeting directly from the Zoom desktop client, consider scheduling a meeting via the Zoom web portal (zoom.us). In doing so, you’ll be given the opportunity to maintain far more control over the security of a meeting.

Settings to Enable During a Meeting

While following the steps above proactively secures a meeting before it takes place, a few more security features should be considered once the meeting has begun.

Final Verdict: Zoom is Safe to Use

As some states have now begun to prosecute Zoombombing as a crime, Zoom is hopeful that cybercriminals will think twice before entering the online platform. That said, Zoom remains an excellent outlet to maintain communication between family, friends, and colleagues. As it stands now, Zoom’s developers have found a balance between securing the privacy of users alongside the diverse telecommuting needs of the growing remote workforce. In turn, Zoom continues to offer end-to-end encryption; ensuring video, audio, screen sharing and chat are protected whilst being exchanged between individuals.

By following the steps above, individuals can elevate the back-end security measures that Zoom has published, and make sure the platform remains a viable source to conduct business. For more settings to improve your Zoom experience, Rocket IT invites you to visit rocketit.com/zoom-easter-eggs/ to read about lesser-known features hidden deep within the app.