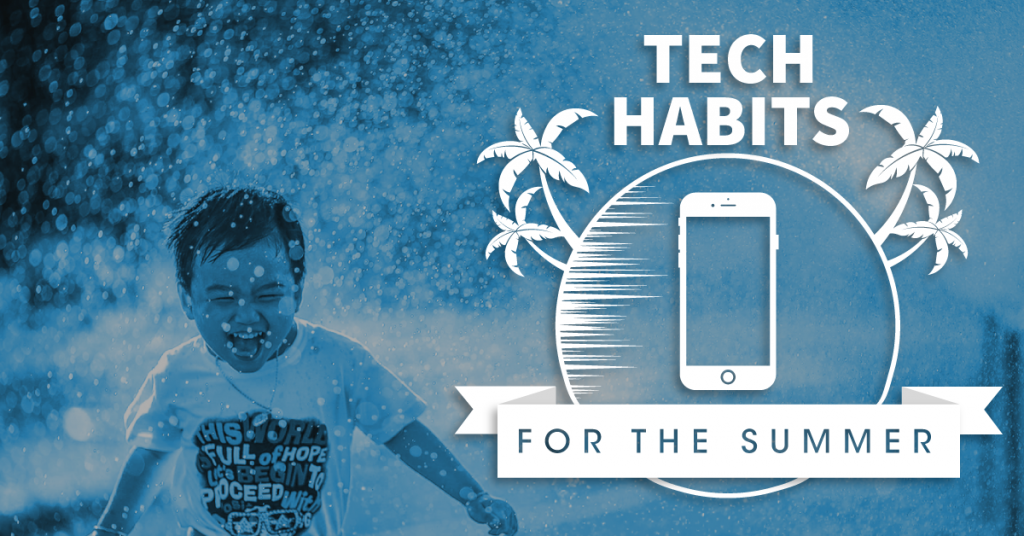 With the school year coming to a close, children and teenagers around the nation rejoice at the prospect of having extended free time and fun throughout the upcoming weeks.

For many of these vacation-bound students, a significant amount of their leisure activities will take place in a digital realm, unlike any environment their parents experienced just a few decades prior. While, from the perspective of the guardian, limiting these technology-based interactions appears to be in the best interest of the child or teen, it’s important to understand the positive and negative impacts that this management may bring about.

In this article, Rocket IT provides readers with insight into how to spot poor technology habits, the positive correlation technology can have on adolescent learning, and some steps to integrate healthy technology practices into a summer routine.

For the later tail of Generation Z, and the soon-to-be explosion of Generation Alpha, the Internet has, and always will be, a primary staple of their existence. As such, it remains natural for the individuals of these groups to actively seek out new and exciting technologies early on in life. In moderation, this excitement for innovation can bring about a healthy passion for technology, which has the potential to then transition into a fruitful career.

That said, even the greatest of tech visionaries preoccupy themselves with activities outside of the digital domain. For example, the iconic Microsoft tycoon himself, Bill Gates, regularly finds himself on the tennis court, while Tesla Founder and CEO, Elon Musk, decompresses over baking. Without establishing a healthy balance between technology and other activities over the course of this summer vacation, children and teens may find themselves faced with the following series of negative effects.

Now that we’ve done exceptional work highlighting all of the repercussions associated with extended technology use in teens and children, where does one begin in protecting the mind of their child? While your first instinct may be to place them in solitary confinement for the next few years, let us assure you that this will only set your child up for failure. Instead, like most things in life, it falls upon the shoulders of parents to ensure their children understand how to effectively blend technology with other areas of life. By adhering to some of the following recommendations, parents can lay a foundation of healthy technology habits this summer, assisting in relationship cultivation and positive behavioral signs.

As previously mentioned, extended use of social media and online forums has the potential to bring about tendencies of social isolation. Keeping that in mind, it’s important to understand that completely barring a teen from accessing relationship-building technology can leave them feeling disconnected from their peers during the summer break. Therefore, as social media has continued to reach new heights in today’s society, a fine line must be drawn to distinctly define what constitutes a healthy rapport with these platforms.

While completing this objective is no easy task, ensuring your teen joins credible and appropriately moderated online communities is a good place to start. When provided with a safe and open environment of discussion, these Internet groups offer members resources comparable to that of a school-sponsored club. Furthermore, depending upon the locality of the group, the online relationships established have the potential to transition into real-world friendships.

With that said, there are some precautionary measures that should be taken to ensure your child’s safety when engaging in online communities. Although many forums are heavily monitored by admins, the age-old rule of “stranger danger” still applies to those individuals your child meets online. Teens should also be made aware of the phishing tactics cybercriminals are now deploying, such as sending links to fraudulent sites, in hopes of collecting personal data and credit card information. By taking a quick moment to briefly educate your child on this topic, you can greatly mitigate some of the risks associated with using social media platforms.

Similar to the excitement that may be sparked from conversing with like-minded individuals, truly engaging with content can assist in improving cognitive thinking, team building and problem-solving skills in adolescents. Rather than allowing children and teens to passively view content like a couch potato this summer, consider introducing them to media that promotes interaction. Child-friendly YouTube tutorials and online workshops, for example, offer a great method to assist in maintaining an active mind throughout the summer break. In particular, Rocket IT team members have found KnowBe4’s activity workbooks to do an excellent job explaining the importance of cybersecurity on an elementary level.

Regardless of your child’s interests, there’s bound to be a workshop you can both partake in. Below, we’ve taken the liberty to list some ideas of popular technology trends, and how they can be altered to promote learning and teamwork.

Needless to say, there are many initiatives that can be used to empower a child’s imagination, problem-solving skills, and creativity, while simultaneously satisfying their urge to play around with technology during the summer hiatus.

No matter how hard parents push their children to make healthy life choices, this task will remain nearly impossible should that parent not adopt similar practices (As the old idiom goes, monkey see, monkey do). Keeping that in mind, it’s important not to make giant or sudden shifts in technology usage all at once. Instead, here are a few tips the entire household can practice this summer to promote healthy technology habits.

As you can tell, leading by example is crucial to the success of adopting healthy technology habits this summer. It’s essential to understand that the rapid development of technology over the last few years has significantly altered the environment in which younger generations are raised.

As new innovations continue to seamlessly integrate with the world around us, it’s only natural for technology to pique the interest of children and teens. That said, showing signs of interest in technology doesn’t always result in negative consequences. By responsibly exposing adolescents to the technology of today, parents have the power to set their children up for a successful tomorrow.