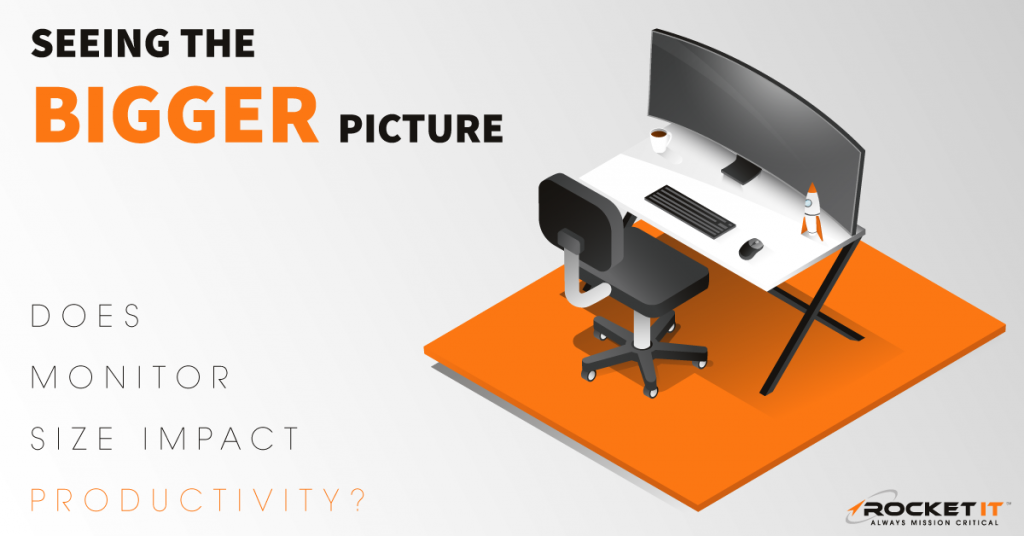 As the processing power of computers continues to increase, an emphasis has been placed on the speed in which individuals are able to complete standard workplace tasks.

While it is easy to assume that this escalation in productivity is directly correlated to the quickness of the PC’s internal components, other technological elements may have an equally great impact on an individual’s cognitive abilities. By simply increasing the display space and resolution quality in which content is viewed, individuals may quickly find themselves adhering to a better workflow while experiencing a greater sense of satisfaction.

The Flaws of Common-Place Monitors

By today’s standards, typical workplace environments tend to house monitors restricted to a 16:9 aspect ratio. While this is a significant leap from the box-shaped CRT displays of years past, the relatively small screen sizes of common-place monitors are not without their flaws. For one, many individuals achieve a heightened sense of productivity when they are capable of viewing two or more application windows simultaneously. While a single 16:9 monitor is theoretically able to achieve this goal, the limited screen real estate of these devices can result in extensive eye strain amongst users.

Additionally, fumbling about multiple windows leads to frustration in and of its own. When an individual is forced to continuously switch between windows to perform a task, a cognitive strain is placed on the brain, leading to misclicks and lost time.

A blast from the past – Macintosh 128k CRT Monitor

In an effort to alleviate the growing pains associated with multitasking in the digital realm, there’s been a rapid shift towards the use of two or more monitor screens. By expanding a desktop’s landscape across multiple 16:9 screens, users can reap a few key benefits not achievable through a single display.

While it remains difficult to argue that dual monitors drastically improve an individual’s productivity, this setup isn’t without its limitations. Because most monitors still maintain a pretty sizable frame, a bezel gap is bound to be in view when setting two 16:9 monitors next to each other. As a result, this tends to keep an individual’s eyesight focused on one monitor, rather than focused on both screens as a whole. In particular, a problem arises from this effect when an individual is working on visual items that require a larger sense of scale.

Additionally, it’s important to note the major flaw of using two monitors when it comes to designing graphic-based content. After using a monitor for some time, LEDs dim and saturation can fade. Therefore, while the colors of an item may be depicted a certain way on one screen, dragging that same window over to another monitor may cause a shift in depicted colors – making it difficult to keep design consistency.

Although the aforementioned setbacks of a dual-screen setup may not be a problem for most individuals, there are some roles where these problems can become quite the annoyance. In regard to finding a solution for those users – look no further than an ultrawide 4k monitor. Before beginning to discuss the key benefits of using one of these displays, let’s first understand what exactly “ultrawide 4k” entails.

While the standard monitors previously discussed are constrained to a 16:9 aspect ratio, ultrawide monitors use a 21:9 ratio. For comparison, picture a display with a ratio similar to that of a movie theatre screen. The 4k element of these ultrawide monitors refers to the number of pixels continuously present on screen at any given time. While in years past, a price-conscious consumer may have been hard-pressed to find a reasonably-priced monitor with over 1080 pixels, 4k technology has dramatically dipped in price within just the last couple of years. As a result, manufacturers are able to cost-effectively produce monitors on a much larger scale, without taking a hit to the image quality displayed on the screen.

Can You Handle the Power?

As with most brand-new pieces of technology, upgrading to an ultrawide monitor does not come without caveats. Unfortunately, incorporating a 4k ultrawide display into a computer setup isn’t just as simple as plugging it in and turning it on. Because of the resolution that is delivered through the monitor’s 21:9 aspect ratio, more power is needed to properly drive the display. Therefore, if the computer’s specifications do not meet the requirements needed to power the ultrawide monitor, there’s a possibility that the screen will either display images at an inadequate resolution or not power on at all.

For those potential consumers interested in learning if their PC can meet the demands of a 4k ultrawide monitor, there are three internal components to pay close attention to the computer’s video card, CPU and RAM. When a user’s PC does not contain a high-end dedicated video card, the computer is forced to place more strain on its CPU. In return, this results in quite a bit of noticeable latency – which has the potential to adversely impact productivity. In addition to inspecting the video card and CPU of the PC, individuals interested in using a 4k ultrawide monitor need to take a close look at the computer’s RAM. Depending on the model of the ultrawide monitor selected, an increase in RAM may be needed to ensure applications run smoothly across the pixel-dense display.

Needless to say, analyzing the compatibility between PC components and new hardware can be daunting. Fortunately, Rocket IT’s team is here to address the concerns of those individuals interested in boosting their productivity through technology. By giving us a call at 770-441-2520, our team can review your system’s configuration to determine if upgrading to a 4k ultrawide monitor is a viable solution.

Bring on the Benefits

Once an individual determines that his or her PC’s internal hardware can support a 4k ultrawide monitor, they may find themselves intrigued to learn what benefits come along with purchasing such an upgrade. Simply put, ultrawide monitors offer all the productivity advantages of a dual monitor setup, with essentially none of the drawbacks. That said, let’s jump into discussing some of the major benefits of using an ultrawide monitor.

Ready for an Upgrade?

As you may have gathered, selecting the appropriate monitor to boost an individual’s productivity is partially dependent upon the tasks that an individual is regularly assigned to complete. With that said, keep in mind that the studies linked in this article agree that more screen real estate equates to higher productivity levels in most individuals. And with 4k ultrawide monitors steadily decreasing in price, now may be a great time to consider upgrading your desktop setup. To learn if your hardware adequately supports 4k monitors and 21:9 resolutions, give Rocket IT a call at 770-441-2520.