Initial Thoughts on the Apple iPad 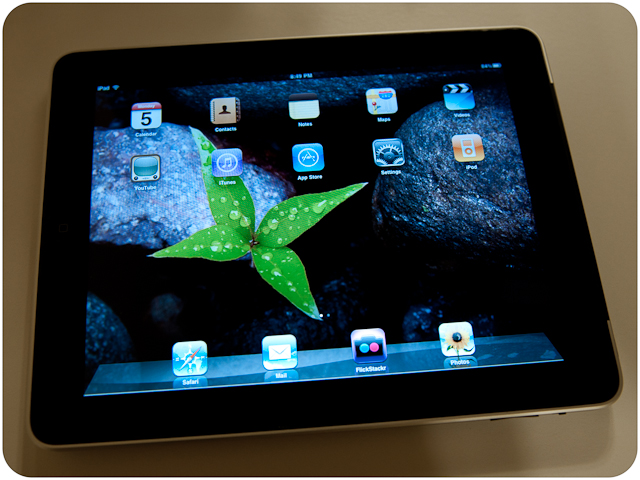 Initial Thoughts on the Apple iPad

For years I’ve waited for someone to come out with a great tablet computer. One that can do all the things my notebook computer can do, but in a smaller, lighter package and with a really great touchscreen. Presumably, it would come with a stylus and would recognize my handwriting. It would definitely run Windows and my favorite apps, like Excel, Word, and QuickBooks. It would connect to a real keyboard and mouse, it would work with a real monitor, and it wouldn’t cost an arm and a leg. Yes, for all these things, I’ve been waiting a very long time.

It’s no secret that I’m a huge fan of Windows PCs and business apps, but when rumors revealed that Apple had a tablet in the works, I knew I’d have to have one. It might not run Word or Excel, I figured, but it would surely have a beautiful screen and a great design. Besides, I could use a high-tech device for managing my email and calendar, browsing the web, and reading books. Apple’s new tablet gadget would be great for all those things, I imagined. And thus began my months-long wait for the Apple iPad.

Last Saturday morning, with my long wait finally behind me, I took the plunge and bought my iPad. Specifically, I bought the 64 GB model with the 3G wireless option (all iPads come with Wi-Fi – the kind of wireless Internet access most of us have in our homes and offices, but some models also support AT&T’s 3G wireless network). Basic setup was a cinch. The iPad was up and running within a few minutes of taking it out of the box. From there, things got much more interesting. The following are some of my initial thoughts on the device.

Ultimately, the iPad is not the tablet computer I’ve been dreaming about for years. It doesn’t include a stylus and it doesn’t run Windows, Word, Excel, or QuickBooks – at least not directly. Rather, it’s the first very successful launch of a whole new class of mobile devices. While it’s clear that the iPad is still new technology with lots of little wrinkles to work out, the portable design, great screen, and novel interface – all backed by a progressive company with loads of money in the bank and legions of loyal fans – will ensure its success at home and with many self-directed professionals. However, only time (and some really good apps) will tell whether larger businesses will embrace the Apple iPad.

Now that I’ve been using the iPad for another week or so, I have several updates that I’d like to share: Matt Hyatt is the Founder and CEO of Rocket IT, the IT department for all kinds of organizations around Gwinnett. His award-winning firm provides both the strategy and support needed to help businesses thrive.

Matt currently serves on the Executive Board of the Gwinnett County Chamber of Commerce as the Vice Chair of Entrepreneurship & Small Business, is an active supporter of Gwinnett County Public Schools, and is a member of several peer groups (like Entrepreneurs’ Organization) in addition to cofounding two of his own. In 2014, Matt was awarded the Pinnacle Small Business Person of the Year.

Outside of work, Matt enjoys spending time with his wife, Maureen, and their two teenage children pursuing their shared passions for photography, travel, and food. He also regularly runs with a team in ultra-long distance relay races.